With the murder of last year’s fête judge now but a hazy memory, the village of Elmesbury has retired to its former tranquil existence. That is, until a mysterious newcomer sets in motion a series of events that will see members of the W.I. crossing wooden spoons at dawn.

In the midst of preparing for her long-awaited engagement party, redoubtable village busybody Beattie Bramshaw not only finds herself embroiled in a one-woman campaign to save the elm tree from which the village gets its name, but having to contend with an outbreak of unrest within her beloved W.I. group. Rivalry to win favour with the judge of this year’s fête has fuelled dissent within the ranks and, when two members are found dead in mysterious circumstances, suspicions run rife.

Confident the devil is not only in the cake but in the detail, Beattie determines to uncover the clues that will ultimately lead to the killer’s conviction. But can she solve the mystery before another member of the W.I. is picked off?

Banana Devil Cake is a comedy crime caper in the spirit of Agatha Raisin and one that is guaranteed to lift your spirits. Prepare yourself for a tale of tea, cake and riotous goings-on from the author of Marrow Jam.

Village shenanigans with a side of murder

Elderly but indomitable Beattie Bramshaw has a lot on her plate, in some cases literally. She's planning her engagement party, campaigning to save the village elm, and helping to organise the village fete with the fractious W.I. Just as one problem is put in its place, another rises to meet it - like the sudden death of not one, but two of her compatriots at the W.I. Suspicion falls on a celebrity psychic hiding out in the village after scandal, but Beattie can't seem to stop digging.

This is the second in a series, and fair warning - it totally spoils the ending of the first one in an extended series of court scenes. While this isn't usual for murder mysteries, it does signal this is a rather different sort of book - one without a dead body until 48% of the way through.

This may prove troublesome for those who want their murders front and centre, however for those who would rather take the scenic route, it's a fun slice of life with a cast of quirky villagers. Beattie may be bossy and stubborn, but you can't help but be charmed by her take-no-nonsense attitude to life (and death). I especially enjoyed her ruminations on the best way to spy on the neighbours. The women of the W.I. are headstrong and diverse, leading to heads butting all over the place.

I did guess the murderer quite quickly (which isn't usual for me) but it was nice to see all the pieces slot into place. I do feel like there were a few plot threads that weren't entirely wrapped up - was Leo trying to butter Beattie up? what was up with the quiche? and did anyone manage to bake a proper Banana Devil Cake?

Unanswered questions aside, this was a fun comedic caper through the cutthroat world of village baking with a side of murder. If that sounds like your cup of tea, you'll love this.

Disclaimer: I received a copy of this book from the publisher via Rachel's Random Resources; all opinions are my own. 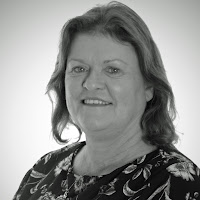 Susan A. King lives with her husband in a quiet suburb in Hampshire. Between them they have four grown-up sons.

The inspiration for her Beattie Bramshaw novels comes from her long experience and observation of competitors at the local Romsey Show, where she regularly aspires to win Best in Show with her floral arrangements.